A shocking statistic had been released recently in Japan. In March 2019, the Japanese Ministry of Education, Culture, Sports, Science, and Technology released a report about a research of “Public Attitudes to Science and Technology.” According to the report, the proportion of interest in science and technology was below 60%, which is the worst level in the last decade. The sense of reliability of scientists was at 75%, but this number is also deteriorating in the past few years. What is causing this lack of faith in science? In this article, I would like to look into some of the problems science is facing.

1. An Ill “Addiction” towards Accuracy

What comes into your mind when you hear the word “Science”? I believe most of you will imagine something around ‘obtaining data through experiments and observations to uncover the principles behind the various phenomenon that surrounds us.’ According to the Oxford English Dictionary, science is simply defined as ‘the knowledge of the physical world.‘ In addition to this definition, I think we can all agree that numerical data has a huge meaning in scientific discoveries (the statistics I referred to in the abstract are also numerical data). However, why is that true?

The reason is that numerical data has persuasiveness. Let’s say I claimed that, ‘based on my experience, there are many people who are not interested in science.’ That does not sound like something you should be trusting. However, if I say ‘based on a survey conducted on March 2019, the proportion of people interested in science were 59% and nearly 40% did not show any interest,’ it becomes much easier to imagine what I am trying to say and improves the persuasiveness of the fact. Additionally, in many cases, an accurate number is preferred. Again, with the earlier example, I could have said ‘around 60%’ instead of ‘59%.’ However, by using ‘59%,’ it gives the impression that the research was done with a greater accuracy. In this way, science requires an accurate numerical proof to persuade that the argument is true.

Nonetheless, by offering so much data in pursuit of accuracy, science is making itself extremely complex and difficult to understand. Tyler DeWitt gave an interesting example to this in his TED talk through his experience in teaching science to high school students. He claims that Science has an ‘obsession with seriousness.’ Looking at the example of what high school textbooks have to say about duplication of bacteriophage*. For those without professional knowledge and high school students, “The Virus can start to make more copies of themselves by slipping their DNA into a bacterium.’ However, professionals will come in and say it has to be revised to ‘Bacteriophage replication is initiated through the induction of viral nucleic acid into a bacterium’ so that it becomes more “accurate.” Both are trying to explain the same thing, but the latter is favoured in the scientific community. On the other hand, the former is easier to understand for those without a professional background. If anyone wants to learn about them to a professional level, they just have to learn some of the complexing mechanisms at universities in the first place, and the former is more than enough information for understanding the key concepts. Conversely, making science complicating is a bigger problem than trying to teach accurate knowledge.

The fact that there are so much data around us itself is also becoming a problem. For a long time, science started from formulating a hypothesis and proceeded to collect data through observation and experiments. However, due to an increase in data, the opposite is becoming possible as well. In most cases, the experimental procedure is the same. Still, it is also possible to cherrypick convenient information from a huge data set. In worst cases, we can formulate a hypothesis (whether it should be called a ‘hypothesis’) based on the data, and make an experiment look like it is true and proved scientifically. An example of this is a paper published in 2004; “The New Evidence for the Theory of the Stork.” The paper “demonstrated” that there is a correlation between out-of-hospital birth rates and the stork population in Germany. (The paper has a disclaimer that states that “it is an example of how studies based on popular belief and unsubstantiated theory, seconded by low quality references and supported by coincidental statistical association could lead to apparent scientific endorsement.”) While this particular paper was composed for educational purposes, it is highly likely that there is fake news circulating us resulting in the superficial interpretation of data. Moreover, there can be cases where one uses this method intentionally to make false claims seem real and scientifically proven. These are known as ‘Pseudoscience‘ and is a major problem in the scientific community. 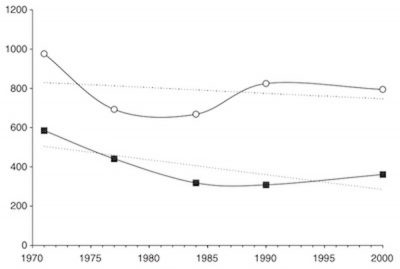 The number of storks（black）and the number of out-of-hospital birth（white）. The correlation is of course superficial, but the data appears to be correlated. （Blackwell publishing）。

Likewise, the addiction towards accuracy makes science difficult or allows false information to seem real. These can be some of the reasons why science is losing faith.

*The duplication of bacteriophage (through a process known as transformation) occurs in a way that the DNA of phage forces a bacterium to produce phage offspring. From the observer, it looks as if the bacterium had transformed into a phage-making machine, hence the name of the process.

2. The Limit in the Pursuit of Accuracy

Let’s say someone claimed to have seen a UFO. Through scientific observation based on their claims or images, you can decide if that is, in fact, a UFO or not. However, no matter how many claims you verify, it is impossible to say if UFO actually exists or not with this information. Why? Perhaps you believed that UFO does not exist based on your experiences. You will definitely have to prove that all of the claims about UFO sightings are false. Still, you will not be able to say that UFO definitely does not exist. This is because you cannot deny the 0.00…001% chance of existence of UFO, or the fact that the definite proof of the existence of UFO simply has not been found yet. Accuracy is everything in science, and to achieve that, we should always keep in mind the possibility that the reality as we see can change in certain circumstances. Therefore, we will never be able to prove that something ‘never exists’ (cf. Devil’s proof). The only time we can prove the existence of UFO is when they actually appear to our physical world.

Another good example may be the existence of god. Religion (obviously) believes in the existence of God, whereas philosophy denies that. The most accurate answer for science, on the other hand, will be ‘unknown.’ Although we gather much information, it will never be enough to prove or disprove the very existence of God, unless they appear physically in front of us. In the bottom line, in a sense, science does not have the power to prove the ultimate reality.

One thing to bear in mind is that this does not mean we cannot hold personal views towards what is not proved definitely. It is actually the opposite. By having personal views, we can formulate a hypothesis which will contribute to moving science forward. What I am really trying to say is that we should not claim that these views are actually true, or force someone else to share the same view. We may not be able to say what is ultimately true, but by taking in other opinions, we can definitely step closer to the ultimate truth. That is how science should operate.

For those who do not fully understand this aspect of science may feel science is contradicting between accuracy and uncertainty. This insufficient understanding of what science really is maybe making science even more confusing.

In this article, we’ve looked into the nature of science (i.e. the addiction towards accuracy) that causes certain problems in science. In my next article, I would like to go further and look into the systems that are disrupting science. 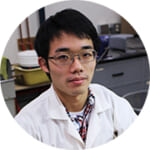 Specialty：Paleontology and Science Communication
A budding researcher who majors Paleontology at University of Alberta. His research on Foraminifera  was posted on academic journals when he was in high school.

Would you buy him a cup of coffee？（To Support Portal）