Recent advancements in scientific understanding of life and forest systems have elucidated the physical, chemical and structural differences and similarities between cities and forests. Also, numbers of functions of forests that were devoid in cities are finally available in our urbanism. In this series, I would explore the possibility of cities to evolve into a new form of forests for the planet earth.
（Image from “Psycho-Pass the Movie”）

Cities have always been contrasted with forests since mankind began to build cities. This is due to the long-standing and shared image into forests being abounding in mysterious phenomena with creatures beyond understanding. The Studio Ghibli’s movie “Princess Mononoke” also depicts the duality between physical benefits brought by the forest and the strong awe to it. These psychological trends appear to have been common in Japan, as well as in Asia, Western Europe and America, all the ancient civilizations in areas once predominated by forests.

With the majority of the world’s population now living in cities, the public’s image of forests has lost physical reality from firsthand experience, and thus it ends up to be some dangerously simplistic symbolization and contrasting with cities generally from the visual impression. Especially by today’s increasing awareness on environmental issues, cities are often regarded as a product of inconsiderable violence, while forests are spoken of as a symbol of “pure” territory. The gap between the values of cities and forests is further deepening.

In this context, the question of whether cities can become like the Amazon rainforest with “technology” may sound ridiculous. However, when we think scientifically without any psychological or cultural image, cities CAN be a new form of “forests” on the Earth. 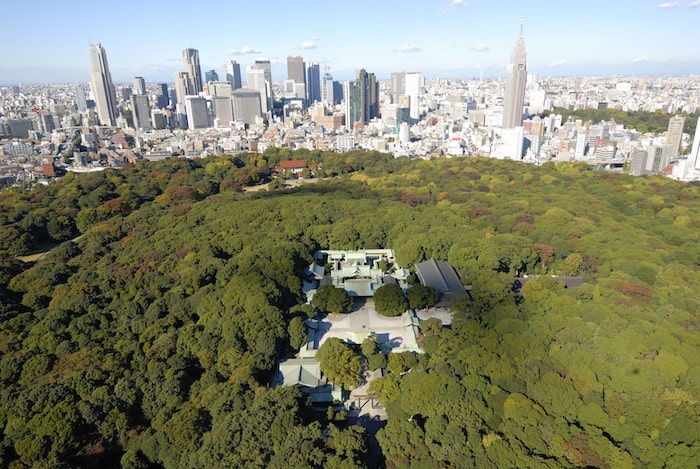 The latest scientific knowledge and technology spring out from the so-called environmentalism provide the basis and potential for such ideas. In recent years, as the understanding of the mechanisms of life and the forest system, which is an aggregate of life, has advanced, the differences and similarities between cities and forests have been clarified physically, chemically, and structurally. In addition, as the development of environmental technologies, varieties of technologies have become available to supplement the lacking functions in cities and to provide public utilities that forests did not have.

To design and standardize “forest-ness” in our urbanism in terms of their functionality rather than of their appearance, it is necessary to scientifically understand forests. The criteria for exploring “forest-like” cities are summarized below based on the functions of forests.

1. Productive ability and its impact to the climate

2. Recycle and redistribution, and its impact to the climate

5. Ark of genes and lab of genetic innovation

Certainly, cities are the primary habitat for human beings, so having a function as normal forests is not enough. Human cities need not only functions but also cultural and historical aesthetics. While these architectural aspects will be discussed in other articles, this time focusing only on the scientific and technological aspects that cities perform on climate and ecosystems.

The first of four episodes deals with the first criterion: productive ability and its impact to climate. We will discuss whether cities can be an indispensable energy producers like forests, and whether cities can be “forest-like” in affecting climate. As a brief conclusion, it is possible, and can even outperform forest’s capacity.

To understand “forest-ness” in terms of energy production and its impact on climate, we must first deepen our understanding of the forest itself. The production in a forest ecosystem is almost entirely by plants. Plants, which are called “primary producers,” can convert the light shed from the sun into nutrients that can be consumed by other organisms. This nutrient is varieties of chemical substances (molecules) centred on a chain of carbon atoms, called organic compounds. In other words, plants convert the energy of light (electromagnetic waves) from the sun into chemical binding energy that can be used by other living things, including humans. 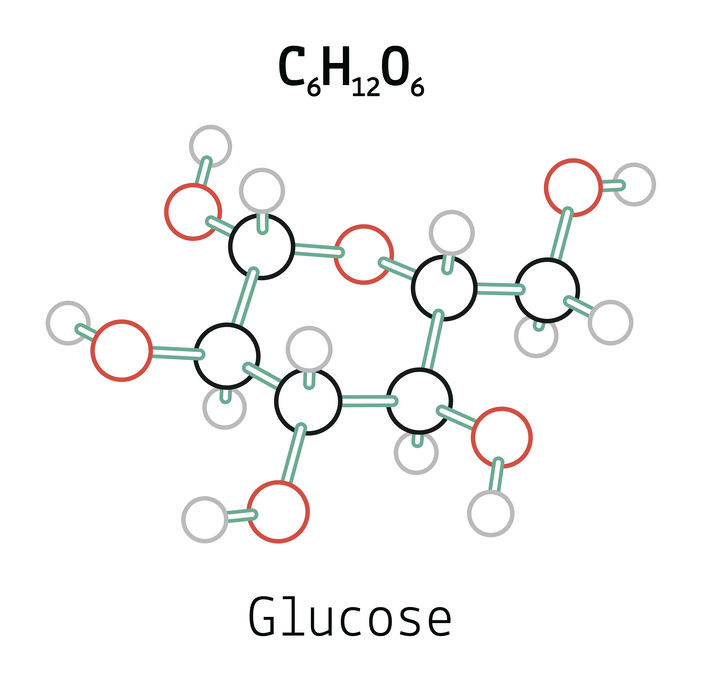 Called “photosynthesis”, in fact, this process consists of consequent two chemical reactions, a “light-dependent reaction” and a “light-independent reaction”. To summarize roughly, first, on the “light” side, water (H2O) is broke down using solar energy. At this moment, energy and hydrogen ions are extracted, and oxygen is emitted. The energy and hydrogen ions are delivered to the “dark” side to convert carbon dioxide from the atmosphere into a compound called G3P, which is the intermediate molecule to immediately produce a “sugar” molecule (such as sucrose, glucose) that can be easily stored as a raw material. This sugar is used to further synthesize complex molecules to maintain plant life, defend against enemies and competitors, and provide energy to grow the body. In addition, the same raw material is converted into fatty acids, amino acids and become materials for cells and cell walls. When an animal or an insect eats and digest part of a plant, those chemical compounds stored are decomposed into sugars, amino acids, fats, and so on, and re-synthesized to support the animal’s life. 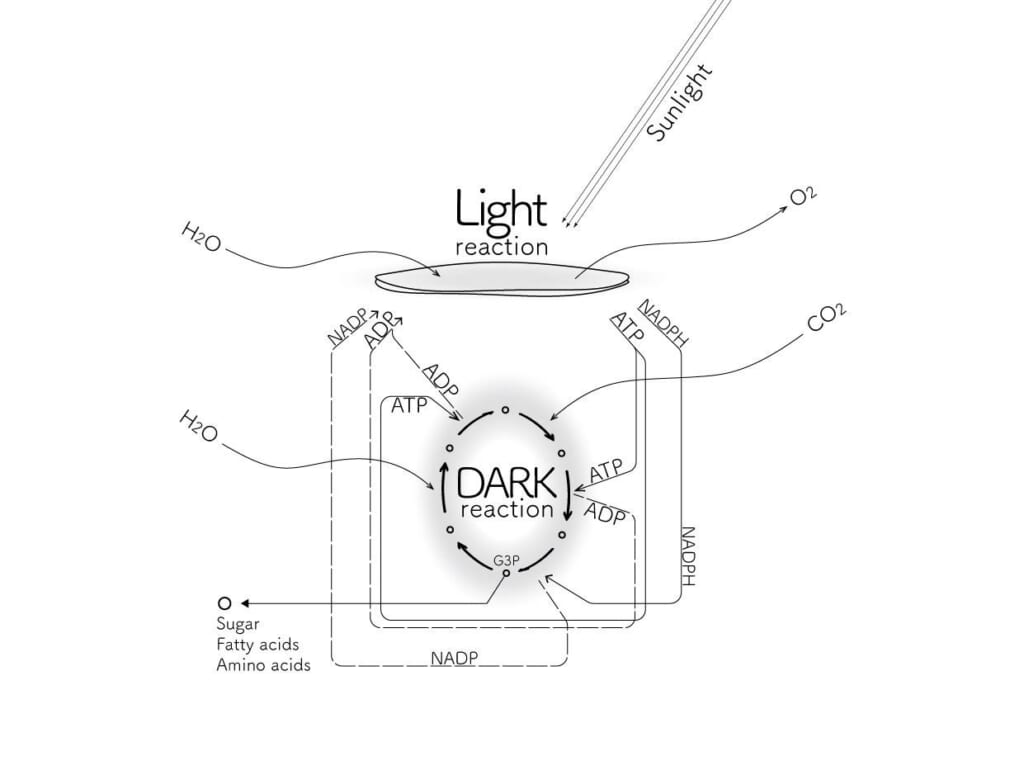 Figure3：Diagram of photosynthetic chemical procedure. In the Light-dependent (light) side, it produces ATP and NADPH out of sunlight and water, and then delivered to the Light-independent (dark) side where they are used to produce fundamental molecule for sugars, fats, amino acids by reacting with CO2 and water

By growing through competing with each other, carbon dioxide is absorbed and stored. This is done particularly efficiently by producing “timbers” which are far more difficult to be decomposed than any other parts (the lignins in the cell walls of trees are still the most difficult molecules to decompose on earth). In other words, the carbon in the air is absorbed, converted to and stored as a robust structure. Of course, plants, like animals, have mitochondria in their cells, so they also breathe and emit carbon dioxide. However, plants that make wood are generally long-lived, and the larger they are, the bigger the wood becomes, and even when they fall down, it takes longer to be completely decomposed. As a result, carbon can be stored on the ground for a long period of time.

This article ends here, and the rest will be introduced in the second to fourth episodes. Those following episodes introduce the possible “forest-like” performance of cities with concrete existing examples of how and in what way they can be realized. 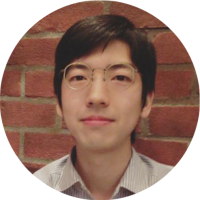 Specialty：Engineering & Architecture
Graduated Kaio University (BEng, Mechanical Eng), he is now studying architecture at AA School of Architecture, exploring urban development in the next generation with an extensive knowledge of a various fields including geography, ecology, molecular biology.